A Peabody Award-winning series for PBS, Liberty! begins in 1763 and ends with the ratification of the US Constitution. With dramatic readings from letters and diaries of the period plus live-action recreations, the film traces the events leading up to the war and America’s fight for freedom.

In 1763, the French have left and America is at peace, under British rule. But dissension is mounting, signified by the Boston Tea Party and the publication of Tom Paine’s book, Common Sense. We follow the course of the Revolution as George Washington assumes command, Benjamin Franklin goes to France seeking support, and Americans come together in a conflict that will forge a new nation. The series concludes with the creation of that extraordinary document, the United States Constitution.

EPISODE 1: “The Reluctant Revolutionaries” 1763-1774
In 1763, the capitol city of America is London, George Washington is lobbying for a post in the British army, the colonists are proud citizens of the British Empire, and admire everything English. No one thinks of Boston harbor when they hear talk of tea parties. In a dozen years, the colonies are on the brink of rebellion. What happens to bring this country so quickly to rebellion against their own country – England?

EPISODE 2: “Blows Must Decide” 1774-1776
A total break from Great Britain remains hard for Americans to imagine, even after shots are fired at Lexington and Concord. Words push matters “Over the Edge” in 1776. Common Sense argues that it is the natural right of men to govern themselves. The Declaration of Independence declares this same idea a “self-evident” truth. For Americans, there is no looking back. There will be war with England.

EPISODE 3: “The Times That Try Men’s Souls” 1776-1777
Days after the Declaration of Independence is signed, a British force arrives in New York harbor. Washington and his troops are driven to New Jersey. With only a few days of enlistment left for many of his volunteers, a desperate Washington leads his army quietly across the Delaware River on the day after Christmas, 1776, to mount a surprise attack on a sleeping garrison in Trenton.

EPISODE 4: “Oh Fatal Ambition” 1777-1778
The “united” states remain in dire need of funds and military support. Congress dispatches Benjamin Franklin to France in hopes of creating an alliance which will provide both. Meanwhile, a British army marches down the Hudson River trying to cut off New England from the other colonies. The British are crushed by Americans at Saratoga. The French enter the conflict on the American side.

EPISODE 5: “The World Turned Upside Down” 1778-1783
The British hope to exploit the issue of slavery and to enlist the support of loyalists in the south. They fail. After a series of brutal engagements, the British army heads for Virginia, only to be trapped by the miraculous convergence of Washington’s army and the French fleet at Yorktown. The end of the war is at hand.

EPISODE 6: “Are We to Be a Nation? 1783-1788
Peace comes to the United States, but governing the world’s newest republic is no simple task. Congress is ineffectual and individual states act like sovereign nations. By the time the Constitutional Convention convenes in 1787, many wonder if the country can survive. The long ratification process helps define what sort of nation the United States is to be—a process that continues to this day. 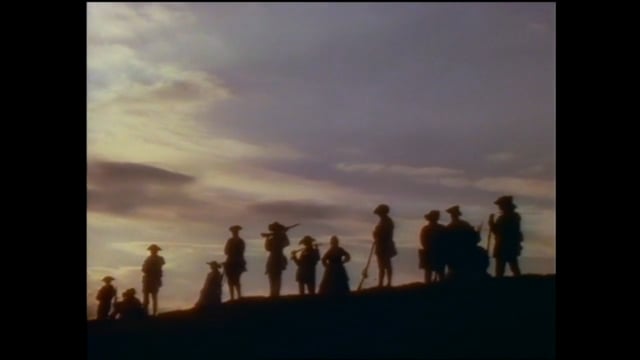 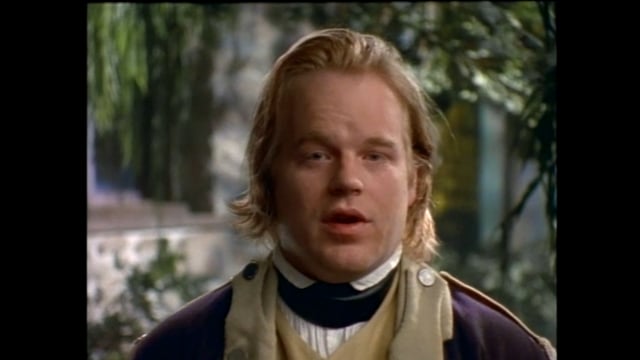 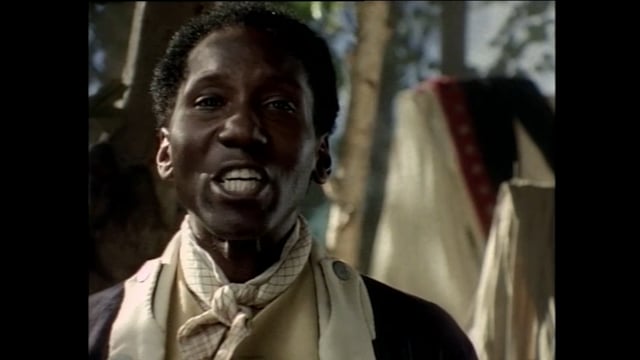 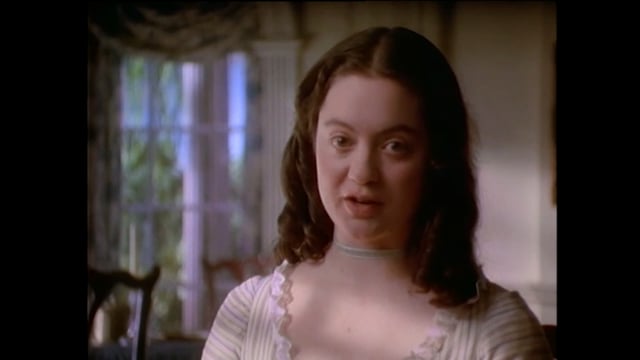 Producer/directors Muffie Meyer and Ellen Hovde and writer Ronald Blumer–who drew from letters, diaries, newspapers and documents of the time to script this epic–show how these snobbish patricians mainly concerned with their status (and feeling deeply inferior to the English aristocracy) were transformed by events and their own strong characters into champions of the people.

It’s exciting, it’s suspenseful, it’s a big Boston Tea Party of a PBS event. So give me Liberty! or give me nothing! This documentary about the Revolution is that dazzling — a great old story retold smartly and captivatingly… (the series) affirms how much of a kick history can be.

Listening to the words of men like Benjamin Franklin and James Madison after watching the Sunday morning politician interview shows, you may wonder where the eloquence of American statesmen has gone. But even the Founders could falter. What can Boston’s John Adams (Peter Donaldson) have been thinking of when he said about New Yorkers, “They all talk very fast, very loud and altogether without paying any attention to each other. Nobody has any manners here.” It was Adams, too, who reflected at the First Continental Congress, “We don’t have men fit for these times.” Liberty!, which covers eight years of diplomacy, war and suffering, and ends with the ratification of the Constitution, proves how wrong even he could be.

This is the best TV history lesson since Ken Burns re-fought the Civil War. It’s a gift to all ages and stages of Americans, native or new… If only Liberty! had been around when I went to school.

The Middlemarch people…have taken the musty smell of the archives out of history. They have gone beyond the visits to the Disney-like colonial-period restorations… They are interested in human interconnection and have managed to breath life into the cardboard figures we all learned about in our fifth-grade classrooms… What a story!

Ken Burns, meet Ellen Hovde and Muffie Meyer. When in the pursuit of a new documentary to make, you might learn a thing or two from them. Hovde and Meyer have produced and directed Liberty! The American Revolution, an engrossing six-hour documentary that brings history to life and makes real people out of our often mythical founding fathers.

Liberty! leaves you amazed by the people who fought for and shaped our country. They made some horrible mistakes, but most of the choices they made were almost miraculously right; including cutting loose from those stiffs on the English throne. Watch the royals if you want, but save some time to honor the people who made sure royalty-watching was sport rather than an obligation.

…this offering presents our country’s founding upheaval as it really was – a close run thing marked as much by incompetence, fear, betrayal and brutality as it was by glorious victory and lofty ideals, a struggle in which far more Colonial Americans were opposed or indifferent to the rebellion than supported it. This was a struggle in which far less greatness and glory appends to the American military triumph than to what a handful of unusual men (and women) were able to do with independence once they had won.

Liberty! offers an exhilarating history lesson. Producer-directors Muffie Meyer and Ellen Hovde have met a daunting challenge with ingenuity…they have to supply visuals for a war before photography. They use drawings, paintings and maps, but they take another step to make the Revolutionary patriots more accessible. Where (Ken) Burns used actors’ voices to intone the words of Civil War figures, Liberty! puts actors … in period costumes and has them deliver fact-based soliloquies to the camera. … In another program, it might be sacrilege to offer history on such terms. But here the style makes that time, from 1763 to 1789, come vibrantly to life.

Liberty! The American Revolution delivers six hours of smashing entertainment. The score is by Richard Einhorn and Grammy Winning violinist Mark O’Conner, who performs with cellist Yo-Yo Ma, trumpet player Wynton Marsalis and the Nashville Symphony…Liberty!’s strength is its ability to package its wealth of information and insights into a riveting production that plays as suspenseful drama while illuminating the most important period in American history.

…alive with human intellect, foibles, anxiety, anger, passion and humor. Inevitably incomplete but consistently surprising, Liberty! The American Revolution is an engrossing drama and an irresistible enticement to learn more. … The contributing historians – including women, blacks and Indians – describe events with such urgency you would think they happened yesterday. Some of the British scholars who explain the Tory side sound as if they’re still annoyed with us.

The most pleasant surprise…is how Liberty! contradicts conventional TV wisdom. The medium supposedly is partial to action and uncomfortable with ideas. But Liberty! is, if anything, more compelling when it’s concerned with the concepts of freedom and self-government than when it’s showing reenactments of patriots ambushing redcoats. Let that be another lesson to us.